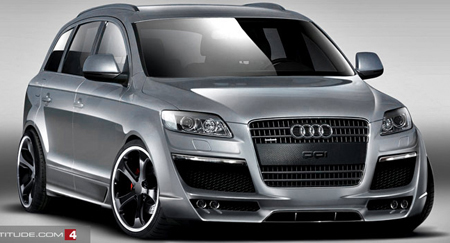 OK, it’s not that I don’t like Audis. I love them. I want to have a fleet of them. But I can’t afford that. One thing I know I don’t want, however, is an Audi SUV. The very name doesn’t sound right to me. An Audi is a sleek vehicle designed to go fast, and an SUV is driven by a soccer mom or a guy on a weekend mountain bike trip.

The folks at Audi aren’t listening to me, of course, especially in the Audi SUV regard because they have this little number called the Q7, which has been around for awhile but has just undergone an extensive makeover courtesy of Germany’s PPI. And they did a few things right; it’s better looking than before, and it has some new features that make it look sleeker and less of a soccer mom commuter.

The front bumper has large air intakes, a matte carbon fiber splitter, and fog lamps; and the company says the result is a smaller lift on the front axles when you’re up to speed. The new brake kit will also help to alleviate some of the holdback when you get up to a more expected speed. The back bumper has cutouts for the exhaust system. The design also serves to tuck the wheels under the frame, sort of like the new VW Beetle.

So here’s the big number: 600. That’s the number of horsepower that you get, and that’s a rather large number for this size vehicle.

All of that aside, it doesn’t look much an Audi or an SUV. Maybe that’s the point?