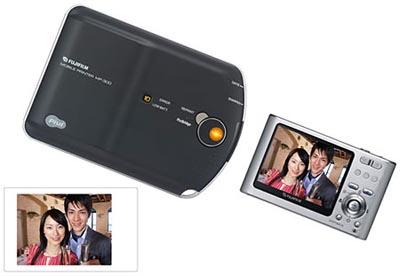 I don’t know when was the last time I actually printed a photograph, but there are still plenty of people out there who enjoy having a physical picture to hold and share. Bringing the concept of Polaroids into the 21st century is the Fujifilm Pivi MP-300 palm-sized printer.

Weighing less than half a pound (including batteries and paper), the MP-300 connects to your PictBridge-capable digital camera via infrared or USB, and then shoots out playing card-sized photos in “less than two minutes.”

Although only available in Japan at this time, you can probably find ways to import the $127 printer for your budding mobile passport picture business.