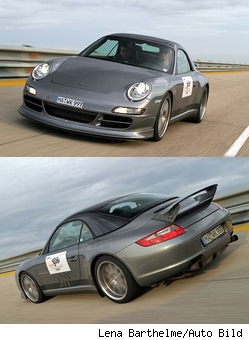 A circular track in Italy called Nardo, just recently played host to a series of trials and tests that would make any serious car aficioniado’s head spin. One impressive event that took place is the record-breaking feat of the Porsche 9ff convertible.

The 9ff can go to 200 km/h in just 5 seconds. At Nardo, it set the world record for convertibles, an astounding 380.5 km/h. It was a record-breaking day for Brabus as well, setting a new sedan world record with the Rocket.

Not sure what you’re going to be able to do with this car once you get it home. Don’t say we didn’t warn you.