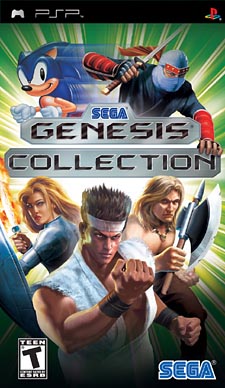 Some people (myself included) may drool over the next-gen graphics and gameplay offered by, say, Gears of War, but don’t fool yourself, retro gaming is most definitely in. On the Nintendo Wii, you’ll be able to enjoy a large library of games through the Virtual Console, but you probably won’t find much of a better retro value than the $30 Sega Genesis Collection for the Sony PSP.

Now that Sega is out of the hardware game, they are very much cashing in on the software end of things. With this unique collection, you’ll be able to enjoy 28 classic titles, including Sonic the Hedgehog. You’ll also get Phantasy Star II, III, and IV, as well as Golden Axe, Altered Beast, Virtua Fighter 2 and more.

Overall, it’s being fairly well received on gaming sites, receiving a score of about 8/10. The only problem is its missing Streets of Rage.