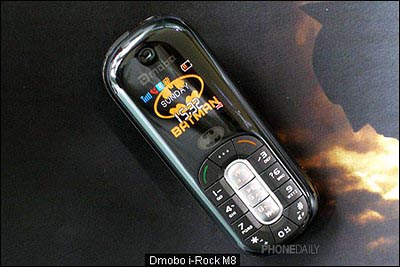 When we first came across the Haier Black Pearl early last month, we were impressed by its tiny size, so-called 3D graphics, MP3 playing capabilities, and shiny black exterior. When the device finally made the review rounds, let’s just say it failed to impress.

Other than slapping on a new paintjob, what better way to revitalize a fallen product than to get some juicy licensed content? Well, Warner Bros. probably didn’t give the okay, but that hasn’t prevented the release of the Dmobi i-Rock M8 Batman phone.

Aesthetically, it appears identical to the Haier Black Pearl, except that they’ve included a bunch of Batman iconography in place of the generic pictures you find through Haier’s menu. Other than that, it’s still the el-cheapo craptacular cell phone we’ve seen before.