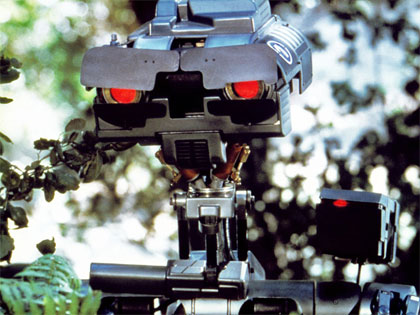 We’re getting ever closer to the sentient robotic age. And we’re not talking The Jetsons here, although this robot does roll around on wheels just like Rosie.

The latest entry in that technological development race is a robot out of Germany that takes its instructions directly from a plugged-in human boss. The human part of it is actually the more fascinating, in that you can see what the robot is seeing via your own exoskeleton.

The primary part of this artificial body is a head-mounted display, which is wired in to the robot’s camera eyes, and that the robot mimics your movements as you walk around. The extendable arm, complete with a three-fingered hand, is useful for picking up things or moving them out of the way. In the comfort of your observation chamber, you bend down and pick something up. The robot responds by doing the same thing in its own environment. We’re sure that the armed forces of the world have uses for this, like disposing of bombs and such, but it’s not ready for primetime consumption at the moment.

The last part of the equation is the headphones that you the user wears, which translate sounds that the robot “hears” through its attached microphones.

It’s like being there, but you’re not, except you sort of are. Depends on what your definition of being there is.

Anyway, the team, which hails from Munich University, has built a few of these robots and are currently working on having them communicate. A two-armed robot is in the works as well.