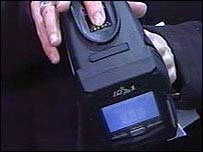 Police in the U.K. are wanting to move forward with a plan to fingerprint stopped motorists to check their identities. Nothing like letting your fingers do the talking.

The idea is that you get both of your index fingers printed, the same procedure that you would undergo if you were arrested and hauled into the station. Maybe the police are looking to cut down on false arrests?

The police insist that the portable fingerprint scanner is a time-saving device because they won’t have to accompany officers to a nearby police station in order to prove their identity. Police also insist that they will not keep the fingerprints in their station files. (All those who believe that raise their hands.)

The way I figure it, this might actually create more high-speed chases, since known offenders will want to avoid those fingerprint scanners like the plague. Police say that they won’t break out the devices unless they are suspicious of someone’s identity claims, but I’m not convinced and neither should you be.

If you live in the U.S. or Canada or anywhere other than Britain, you won’t have to worry about this, for awhile, at least. The fingerprint readers are being unleashed on the unsuspecting public in the U.K. first over the next two months. Accuracy of the device is 94-95%.