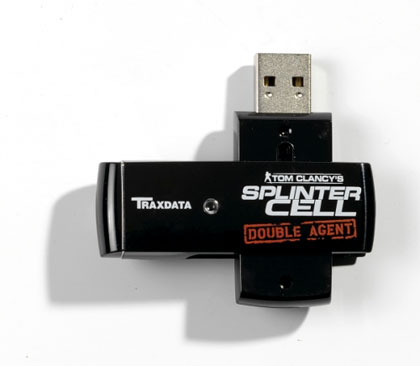 Traxdata has teamed up with Ubisoft Montreal for a fairly unique promotion. If you buy the special edition EZ Drive 1GB USB stick or a 25-disc cake box of DVD-/+R discs, you get a fun Splinter Cell Flash game for free.

This is designed to coincide with the release of the highly anticipated Tom Clancy’s Splinter Cell Double Agent. Obviously, the free Flash game won’t nearly have the same level of depth and complexity as the full official title, but there is certainly an incentive to try your darndest: After you complete the Flash game, you can enter your high score for a chance to win an Xbox 360, Traxdata products and 3 Ubisoft games.

As you’d probably expect, the game is preloaded on the flash drive, whereas if you grab the blank DVDs, you’ll need to head on over to a special website to download it.