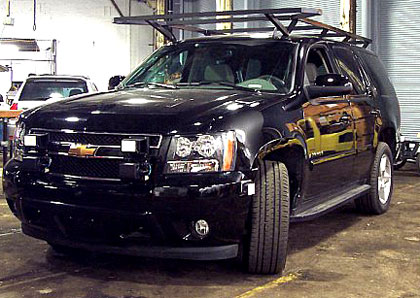 Look closely behind the wheel of that Chevy Tahoe behind you, because there may not be a driver.

In Pittsburgh, a group of researchers are planning to test a robotic vehicle that drives itself through traffic. The Tartan Racing team from Carnegie Mellon, is looking to enter next year’s DARPA robotic vehicle challenge with a car that has been road-tested through the streets of their fair city.

The driver of that vehicle is a suite of computers that has cutting-edge software and hardware, an army of cameras and sensors and lasers, and all manner of high-tech gadgets that we “normal” drivers take for granted. Oh, yes, they’ll have a GPS or two.

The DARPA event is the Defense Advance Research Projects Agency challenge, a robot vehicle “race” that takes place in the middle of nowhere each year. The organizers choose that setting because if the vehicles suddenly run amok, no one gets hurt.

Carnegie Mellon won the 2004 event and came second last year. The US$2 million prize has been eliminated, but organizers are looking to have the event next year anyway. And in anticipation of that, Tartan Racing is getting ready, outfitting that Chevrolet Tahoe vehicle with the latest in computer and navigation wizardry.

We hope that the test events are well publicized.