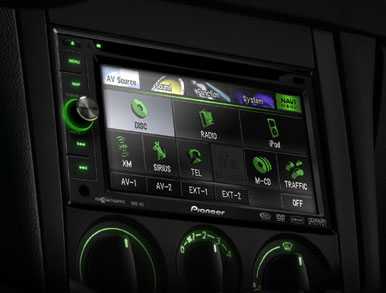 You want the kitchen sink? Pioneer delivers. The AVIC D3 is the latest incarnation in all-around entertainment/navigation from one of the leaders in car stereos and communication devices.

Its features include iPod and Bluetooth connectivity and a larger touch screen than its predecessor. Your iPod has never been so easy to connect to your vehicles audio and video system. Cellphones connect via Bluetooth, and your fingers via the 6.1-inch touch screen.

The GPS sports 11 million points of interest, which is a big round number. That’s good for just about every gas station and Wendys in all U.S. and Canada. The pleasant onboard computer voice politely informs you every time you make a wrong turn. You’ll also hear a greeting when you arrive at your destination.

If an iPod is absent from your gadget bag, the onboard music player supports MP3, WMA, and AAC files from CD. DivX is there as well, for some quick flicks during traffic jams.

But the most exciting thing, at least for those who like their satellite radio, is the option to have either XM or Sirius or even both. If you look closely at the photo, you can see both buttons. It’s not often that you get a choice like that.

You’ll have to wait a few months for the AVIC D3. It’s scheduled to be released in March 2007 at CES, with pricing to be unveiled at a later date. We do know that a subscription to XM’s very helpful NavTraffic will cost you up to US$17 a month.