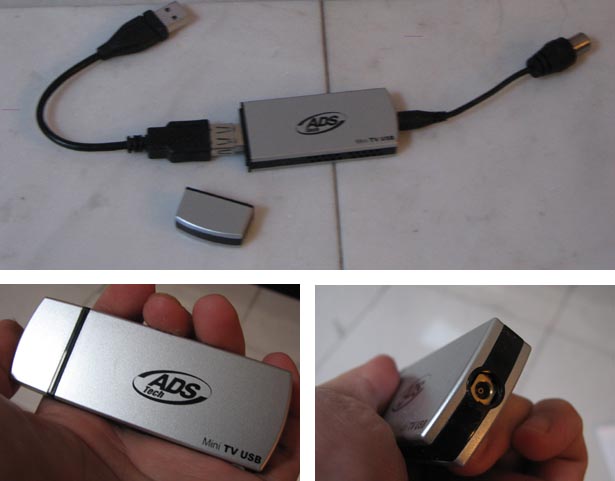 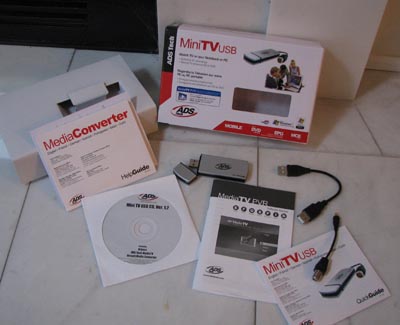 More and more, people are using their computers (particularly laptops) for every aspect of their lives. Spreadsheets to balance the family budget, word processors to write up reports… heck, several people I know use their laptop instead of a DVD player for their televisions, running off the TV-out port of their video cards. With the MiniTVUSB from ADS Tech, the reverse appears to be true. USB TV tuners aren’t exactly new — they’ve been around for quite some time now — so it is the goal of the manufacturers to make their products the most user friendly, cost efficient, and feature-ful solutions they can be.

Looking at the packaging and the box itself, the MiniTVUSB looks like pretty much any generic USB TV tuner on the market. It’s a glossy white box with a little clear window in the front (sort of like those envelopes you get in the mail that say you’ve won a million dollars) displaying the little silver device. Pulling it out, you’ll find the standard set of accompanying documentation (software manual, quick start guides, help guides, product registration, etc.) and a couple of very short extension cables.

The device itself feels sort of like a flash drive. The cap pops off in much the same fashion, revealing a standard USB connector. Depending on the configuration of your computer, you may have some issues getting the MiniTVUSB to fit wherever your port is, and that’s why they’ve included a very short (think two to three-inches) USB extension cable. I would have liked to see something a little longer. The same can be said about the RF cable adapter. On the one end is a connection for the cable that comes out of your wall (or from your cable box, etc… no love for component or even composite video here), and the other end connects to the MiniTVUSB. Simple, straight-forward, no nonsense.

Setting this up to run on your computer is also a straightforward process. Use the included CD to install the necessary drivers, load up the associated software (they call it MediaTV), and away you go. When you first connect, it will ask to scan for available channels, and this is where the first real hiccup occurs. If you get your television from a satellite receiver or a cable box, you will notice that you cannot change channels from your PC. It can only scan for the channels available to the TV itself (i.e., channel 3). This can be a bit of a pain for some people.

Moreover, you’ll want to avoid running the TV tuner on lower-end computers. When I tried watching TV on an old Compaq Presario (AMD Athlon 4, 256MB RAM, etc.), it crashed for apparent lack of RAM. However, when you have a look at the minimum system requirements, it says that 256MB of RAM should be fine and dandy. That said, when I put it through its paces on a newer Dell Inspiron (Intel Centrino, 512MB RAM, etc.), it was fine.

A useful (though somewhat expected) feature is the integrated time-shifting and PVR abilities of the MiniTVUSB. They recommend that you only make use of time-shifting (pausing and rewinding live TV) on a “high performance PC.” How high performance, well, we’ll leave that up to you to decide. For the PVR duties, you can select four levels of quality — extended play, long play, standard play, and high quality — each providing a different level of compression. For example, one minute of video in “extended play” takes about 24MB, whereas the same minute in “high quality” takes about 46MB. Multiply that through to a one-hour show, and you’ve got quite a difference.

After recording, you can make use of the simple video editing software to trim out commercials, burn it onto a DVD or VCD for later viewing, or convert it to an iPod or PSP-friendly format.

The menu navigation is very Windows-esque, giving a distinct Media Center PC feel. The graphics are simple, the animations are clear, but it never gets so cluttered that you would get lost. Outside of the main TV functions, you can also access the settings/setup and three other features: Photo, Music, and Video. Chances are, though, that you’d probably prefer to use Windows Media Player, WinAmp, VLC Media Player, or something similar for those purposes though.

In the end, I’d say I’m reasonably satisfied with what the MiniTVUSB offers, especially the PVR and time-shifting abilities, though you will likely need to invest in an analog cable extension as the couple of inches they supply doesn’t really cut it. Design is intuitive, menus are smooth, but at $79.99, you can probably find something cheaper that’ll do essentially the same thing. Alternatively, just watch TV on a TV.

For more information, check out the official MiniTVUSB webpage.