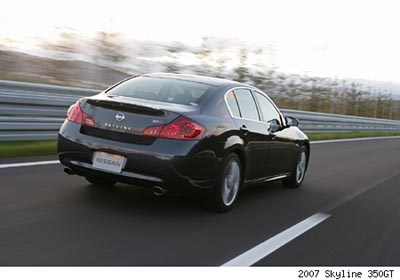 With a “history that dates all the way back to 1957”, the Skyline is one of the most legendary names in Japanese automobiles. That legend continues today with the unveiling of the 12th generation model by Nissan.

Over on our shores, the most recent Skyline was marketed as the Infiniti G35, but the old famed name is still used in Japan. The latest rendition will be powered by the “newly developed VQ35HR V6 engine”, good for 315 horsepower. A smaller 2.5L engine (225hp) is also available. Styling-wise, it looks very much like current G35 (coupe and sedan).

No word on when they’ll make a North American version, but the JDM Skyline — they’ll be making about 1,000 units a month — will retail for between 2.8 million and 3.8 million yen (US$24k to $32k). But the question remains, where’s the new GT-R?