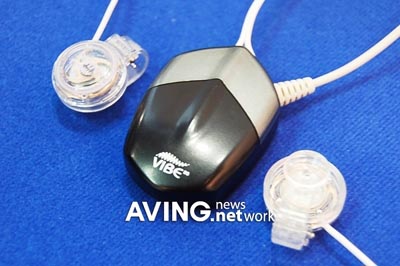 Do you want to feel your music? Like, really feel it? NTech thinks you do, and that’s why they’ve unleashed a set of Bluetooth earbuds that boast a “vibration feature.” Known as the NVE 100B, these earring style headphones do not actually go into your ear canal like conventional buds. Instead, they seem to clip onto your ear. No direct damage to the eardrum, it seems.

The vibration feature, however, is clearly where it’s at. It’s designed to “increase your excitement when playing games or listening to music.” Now imagine if you’re rocking a mobile game where both your cell phone and earphones are vibrating. Wouldn’t that be, uh, interesting?

No pricing information has been released, though the company is aiming for a late-December launch.