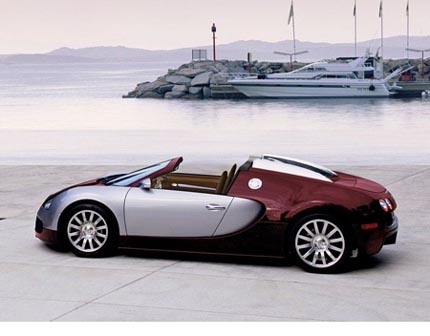 Ever wonder what the 1001hp Bugatti Veyron would look like as a drop top? Wonder no more, because this image has popped up on the internet of the Veyron Roadster. Interestingly, everything seems to be indicating away from a ragtop or even a retractable hard top. Instead, a “laminated glass roof panel” is being developed that you can put on and take off as you please, but you won’t have anywhere to store it. As a result, word is that they’re also working on a “temporary fabric panel… to cover the interior in an emergency situation.”

Among some of the other changes are a beefening of the windshield pillars, the addition of adaptive headlights, and a strengthening of the chassis. For safety reasons, they’re also limiting the top speed to 217mph. I guess that’s fine, since it already lost the horsepower race to the Bristol Fighter T.

This picture, however, is most likely a Photoshop anyways, but it gives you a good idea of what the production model may look like.