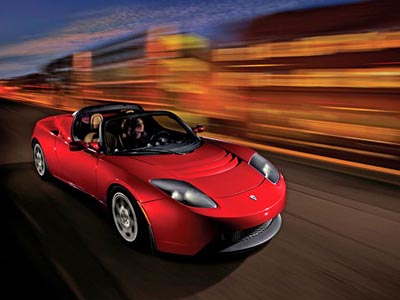 Michael Jordan (no, not his royal Airness) of Automobile Magazine had the chance to take the all-electric Tesla Roadster out for a test drive and he was nice enough to provide us with his impressions. It’s not the cheapest car on the lot at $100,000, but it can certainly go like stink (zero to 60mph in less than four seconds) and on a budget (a full recharge takes a couple of hours, costs about $2.50).

The Tesla Roadster weighs 25% more than the Lotus Elise on which it is based, but it “shrugs off its weight penalty as soon as you lay into the accelerator.” You are treated to 192 lbs-ft of torque at 0 rpm, meaning you get “a hush push in your back as the car instantly leaps forward.” Handling is superb: the car “changes direction as quickly as a water strider on a still pond”. All in all, Jordan sounds pretty impressed. Sight unseen, so am I.