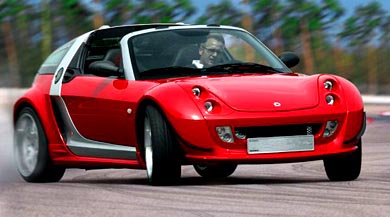 Top Gear is a wonderful, glorious television program on the BBC that provides us with plenty of information about cars both mundane and exotic. For those of you who think of the Smart car as little more than a juiced-up golf cart, you should definitely check out this video where Richard Hammond takes the Roadster variant for a romp on the test track.

The Smart Roadster V6 Brabus, as you can probably guess, is powered by a rather beefy Brabus-tuned V6 engine. Well, really, they took two of the regular three-cylinder turbo engines and glued them together. The result is a very competitive 218 horsepower. With such lightweight construction, this Smart car can do the 0-60 in just six seconds. Too bad (in my opinion, at least) it’s not that much of a looker (and at 300,000 GBP, it ain’t cheap either).