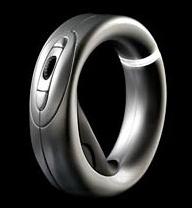 When J.R.R. Tolkien described the “one ring to rule them all”, I don’t think he was talking about this device. The Loop is a gesture-based TV remote that’s shaped like, well, a ring. There’s a scroll wheel on the outside that is not unlike those found on most computer mice.

By combining the motion recognition (perhaps similar to the technology found in the Nintendo Wii?) with the scroll wheel and clicker, you can access all your TV goodies without trying to figure out a whole whack of buttons (you’ll just have to figure out the gestures). You can even bring up “a grid of currently playing movie poster thumbnails to select from.”

Hillcrest Labs, makers of the Loop, are pushing the envelope just a touch with this device, but it’s nice to see people thinking outside the box (and in a ring, in this case).