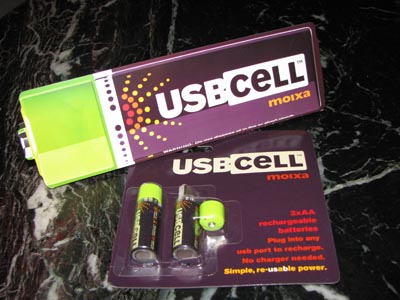 Nowadays, we carry around a lot of electronics. Typically, these all require their own charging dock and/or adapter, so it can be quite a hassle when you take your gadgets with you on the road. But wait, if you’re carrying around your laptop anyways, you’re going to have a ready supply of USB ports. Why not make use of that low voltage power source? That’s the question that Moixa Energy has answered with the USBCELL. As its name indicates, the USBCELL is simply a rechargeable battery that finds its juice from your USB port. They remind you that it will easily latch onto any USB port, whether it’s on a hub, a monitor, a gaming console (like the Xbox 360 depicted in some of their marketing literature), or your notebook.

As a concept, I think this is brilliant. After all, with USBCELL (currently only available in AA format, though other sizes will be developed and sold at a later date) doesn’t need the extra charger that standard NiMH batteries need. But how does it perform? Keep reading to find out.

There’s not very much to be said about this product in terms of physical design, because — after all — it’s “just” a battery. It’s not over-the-top flashy, nor is it so plain that you’ll bore of it. The green cap comes off quite easily, revealing a standard USB connector underneath. The cap is held in place by an elastic string that seems strong enough to withstand some abuse, but don’t go trying to use this as a slingshot.

There is one issue that I have to mention, however. Because of the way that it is shaped, you may not be able to charge two batteries at the same time in adjacent USB ports. If the ports are “vertical”, the USBCELL will block not only the port it’s plugged into, but also both of its neighbors. Alternatively, if your USB ports are “horizontal” (as is the case with several hubs), you probably can place as many USBCELLs as you’d like.

Moreover, if you have recessed USB ports (like on certain laptops), you may have some trouble getting the battery to plug in as well. These problems are inherent with the design of these batteries, and there really isn’t any way around it without implementing an additional product (like a USB extension cable), but that kind of defeats the purpose, doesn’t it? Because couldn’t you just bring a separate charger instead? (BTW, USBCELLs will also charge in “approved” NiMH chargers.)

While the USBCELL seems to be a good idea in theory, in practice, it seems to come up short. Whereas the batteries I use for my digital camera are 2500 mAh each (most people would opt for at least 2000 mAh for high-draw devices like cameras), each USBCELL can only hold onto 1300 mAh. That’s pretty anemic, so I certainly hope that future offerings bump that capacity up a notch or three. If you’re using these batteries for lower-draw devices (TV remotes, etc.), you should be fine though.

They say that just a few minutes of charging can provide several hours of use in “a wireless mouse, games console, dictaphone, presentation pointer, toy or camera.” You’ll get about 90% of the charge within 5 hours or so, with the final top-up taking another couple of hours as it trickle charges.

Yes, the USBCELL is infinitely convenient, especially for road warriors who bring their laptops with them everywhere they go. It would have been nice if the design would allow for multiple batteries to be charged side by side in “vertical” oriented USB ports, but I’m not really sure how they would go about doing that without an additional device of some kind. Perhaps if the cap could come off completely, instead of being tethered to the main body (but this would inevitably lead to many lost caps, just like USB thumb drives).

The only available package from Moixa Energy is one that contains two AA-sized USBCELLs. This two-pack retails for 12.99 GBP (including VAT), or about US$25. I find this to be on the pricey side, even if you don’t need to buy a charger to accompany. For example, I picked up an Energizer travel charger (which slides and folds up to quite the compact package) and four 2500 mAh NiMH batteries for about $40 CAD. That’s four batteries, each of which providing nearly double the power of a USBCELL.

The USBCELL from Moixa Energy is a great idea in theory and it works reasonably well, but there are several drawbacks that would make me hesitate from buying a pack or two. The physical design works fine, especially the LED indicator light, but at such a steep price for not very much power (1300 mAh), I can’t really recommend them unless you have your heart set on its infinite portability and convenience.

They will be shipping to US customers on November 20th 2006.