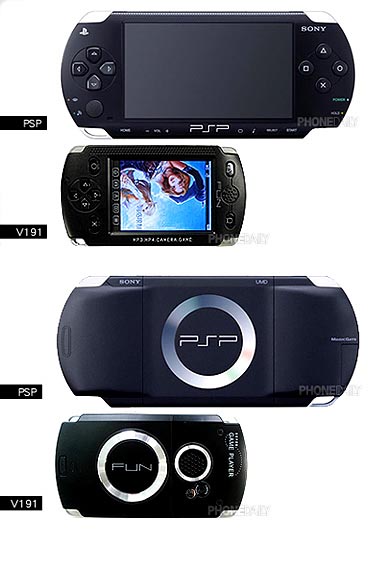 Forget the Apple iPhone, this is clearly where it’s at. The “PSP-inspired” V191 combines all your telephony needs with an ample supply of illegal video game emulators. Naturally, the “MP3-MP4-Camera-Game” device was developed by a Chinese electronics manufactuer, but hey, check out the back: It’s “F U N”.

The directional buttons on the V191 mimic the PSP look a little too well, but there’s a few things going on here that don’t appear on Sony’s offering: 1.3 megapixel camera, microSD expansion slot, and possibly a built-in NES emulator. The one thing that the two devices do have in common, though, is an integrated media player. Yup, and I’m sure the quality control agents double and triple checked this handheld for any kinks.