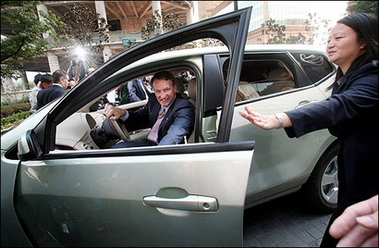 GM is aiming to hit back at China in the automotive market, sort of.

America’s Number 1 automaker says it will begin mass-producing hybrid vehicles in the world’s most populous country within two years. The main manufacturing point is to be the GM plant in Shanghai. It isn’t clear at the moment which of the handful of hybrid cars that GM will make in China. Current popular models include the Chevy Sequel and the Saturn VUE.

The Sequel is hydrogen-powered, the current buzzword among the hybrid circuit. It has both pluses and minuses, the biggest minus being the initial cost due to insufficient current technology.

GM faces a bit of an uphill battle in the face of industry leader Toyota, whose Prius is a top name in the hybrid market at the moment.