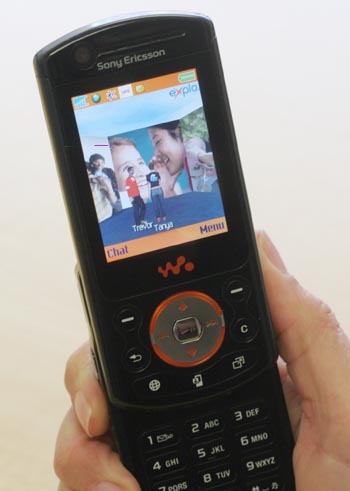 Gemini (no relation to the Canadian Television awards of the same name) is gearing up a whole new mobile solution for Japan. Dubbed eXplo, this “premier software platform” will act as the basis for the unique S! Town 3D user interface found on new SoftBank Mobile cell phones. SoftBank Japan (previously Vodafone Japan) will be offering its subscribers a “rich graphical community to chat, communicate and shop across their wireless devices.”

With S! Town, apparently you can waltz around as your online avatar, entering and leaving “rooms” as you please to perform various tasks like interacting with other users, purchasing merchandise in virtual stores, and sharing multimedia content with friends and family. There’s even games to enjoy “by exploring new zones on their device.”

S! TOWN gives users their first experience with a rich graphical community to chat, communicate and shop across their wireless devices. SoftBank Mobile’s new S! Town-enabled phones are available today throughout Japan on their Sharp and Toshiba phone models.

Gemini also announced that its industry-leading multimedia messaging software, the HyperScale® Messaging Center, and its HyperScale® core technology are the engines behind an additional new SoftBank Mobile service, Arrange Mail ™. Arrange Mail, powered by Gemini’s software, takes messaging to the next level by enabling consumers to compose, send and receive rich text and graphical messages on their existing SoftBank handsets.

“We are pleased to launch S! TOWN, the 3D community platform for wireless devices,” said Ted Matsumoto, Executive Vice President and Chief Strategy Officer of SoftBank Mobile. “S! TOWN and Arrange Mail are revolutionary services that will give our customers a new way of interacting and communicating in their daily lives. We expect these services to be a forerunner in the marketplace by changing the way wireless users interact with one another and their devices.”

“We are pleased to have the opportunity to help SoftBank Mobile deploy next-generation mobile communications services,” said Scott Driggers, Chief Executive Officer and Founder of Gemini Mobile Technologies. “As more people worldwide rely on the wireless phone as their main communication medium, they demand richer and more intuitive ways to interact with their devices. Our eXplo platform is a bold new way of giving users the ability to explore and discover new content and communities via their phones. As wireless devices become increasingly essential to people everywhere, we will continue developing innovative software that powers new generations of wireless connectivity.”

Today’s announcement adds to Gemini’s customer wins worldwide. The company’s scalable messaging platform has been adopted by carriers including SoftBank Mobile in Japan; SmarTone-Vodafone in Hong Kong; FarEasTone in Taiwan; Nextel International in Central & South America; and Sferia in Poland to provide seamless services to their users. In addition, Gemini has an OEM relationship with Lucent Technologies and recently announced agreements with Ericsson China and Italy’s Italtel, expanding its distribution footprint worldwide.

Unlike current offerings that were primarily developed for the Internet and transported to wireless devices, eXplo™ was developed from the ground up to be an engine that powers mobile communications on wireless devices. Based on Gemini’s HyperScale architecture, this powerful platform unifies media, content and communication into a single platform for the first time, providing users with a rich 3D mobile experience. Gemini’s eXplo, offers several features for wireless phones including:

– Meet and interact with other users

– Personalize an individualized space, be it a game room or a snowboarding venue, suited to their preferences, and invite friends to visit virtually

– Communicate via different types of messaging such as Instant Messaging

– Shop for goods from music to videos

– Play games by exploring new zones on their device

With the declining revenue from voice and the increasing potential of data revenue, eXplo gives carriers a new opportunity to offer a sticky social application. The new software accelerates time to market, reduces customer churn, and gives carriers a new channel to generate incremental advertising revenues. For content and commerce providers, such as stores and game developers, eXplo™ provides a new revenue stream and ability to add users rapidly at a low cost.

Gemini expects to announce new carriers and content providers for eXplo in the coming months.