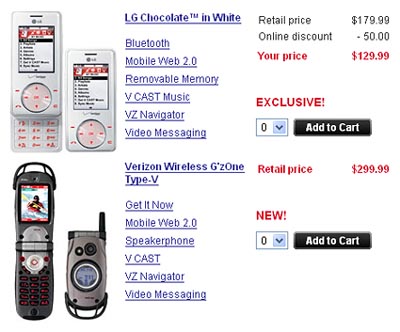 One thing that you have to hand to the folks at Verizon Wireless. They may not have the most attractive spokesperson, but they certainly have some of the better (or at least “different”) looking cell phones this side of the Pacific. The “Can you hear me now” service provider has just added two new phones to its lineup: the LG Chocolate in White and the funkadelic G’zOne Type-V.

You’re probably all too familiar with the former already — it’s just a winterized version of its darker cousin — but some of you may not have heard of the latter. A variant of this rugged Casio-made clamshell was unveiled a few months ago. That scuba mask-like front display will certainly catch your attention, as will the $300 asking price. Ouch. As far as White Chocolate goes, it’ll run you $130 with discounts.