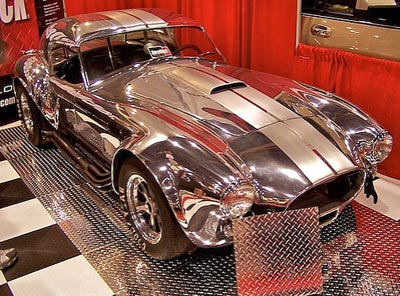 SEMA is easily one of the biggest car shows of the year. People flock there not to see the latest concept car unveilings, but rather to soak in what people can do after a car has been officially released. The Shelby Cobra is a glorious retro sports car, but what a sight it is to behold the car completely decked out in chrome.

I’d imagine this would be a horrible road hazard if it ever hit the streets, reflecting other cars’ headlights every which way. Good thing the model showcased at SEMA was little more than a replica. Nonetheless, it is a formidable achievement as the owner “had to strip and high-polish the thing, and make sure the plastic parts were properly mocked and coated for maximum effect.” Shininess taken to a whole new level.