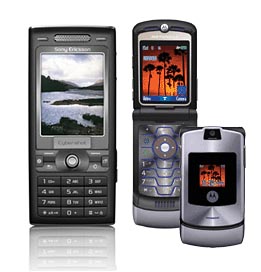 T-Mobile isn’t the only mobile service provider releasing new phones this week. Rogers Wireless of Canada has got a couple of juicy new offerings: the Motorola V3t and Sony Ericsson K790. The V3t (I thought the “T” stood for T-Mobile, so shouldn’t this be V3r for Rogers?) is a very slightly retooled version of the RAZR V3i (which Rogers already carries), boasting a 1.23 megapixel camera, media player, and microSD expansion. At $99 with a contract, it costs half as much as the V3i.