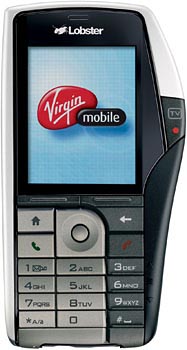 Virgin Mobile is going about the mobile TV thing in a slightly different way. Instead of latching up onto a 3G data network, they’ve opted for something called DAB-IP for the 700TV “Lobster” phone. Reg Hardware put this strangely-designed candybar through its paces and determined that it has its limitations.

In the UK, where this phone is available, you only get to choose from four television stations, because DAB radio (audio) hogs up much of the spectrum. There’s a standard suite of WinMo apps, as is the norm with HTC-made handsets, along with Bluetooth 1.2, GPRS, and tri-band GSM. In the end, they decide that the picture quality isn’t the best, especially for fast-moving or dark scenes, but the asymmetrical Lobster certainly points toward a viable mobile TV alternative.

For the full review, check out the Read link below.