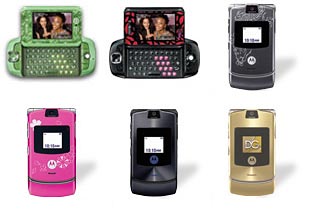 These phones aren’t particularly new to us — they’ve all been leaked previously — but it’s good to finally get some official word on their release. T-Mobile has started selling a bevy of new Motorola RAZRs and Sidekick 3s, offering you a little more variety for when you want to be jump on the bandwagon, yet have just a touch of individuality. On the RAZR front, we have a couple of Miami Ink V3 clamshells, boasting either dragon or cherry blossom tattoos, and running a cool $90 after rebates. There’s also the V3t (a T-Mo exclusive version of the V3i), which is $150 and available in black only, as well as the I-love-gold $300 Dolce & Gabbana V3i. And finally, the limited edition Sidekick 3s, dressed up by LRG and Diane von Furstenburg, will run you a $50 premium over the garden variety, selling for $350 a pop.