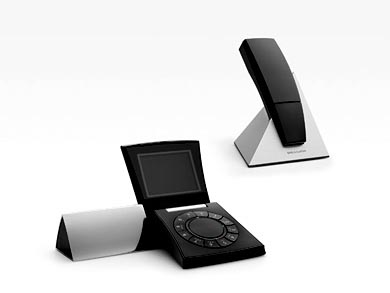 Getting in touch with the universe and being connected to the energies that surround you has just gotten a whole lot easier (but it won’t come cheap). The “Serene” phone — which Bang & Olufsen created in association with Samsung — has now received a price, and it’s a heavy one.

If you recall, we first caught glimpse of this minimalist handset a couple of weeks ago, and we thought it a little odd see the display on the bottom half of the clamshell with the circular keypad filling the top portion. Well, it turns out the phone works the other way too, with the display automatically adjusting to its current orientation.

Its “advanced” features — a VGA camera, WAP 2.0, Bluetooth, and so on — aren’t what will sell you on buying this phone. It’s that it’s so “serene”, so in touch with the plinky plunky music playing in the background of your Japanese rock garden. Be ready to fork out a considerable sum for this interconnectedness, however, as the Serene sells for a not so light $1,275.