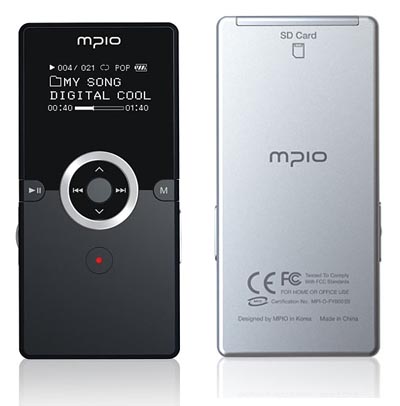 Well, that didn’t long at all. MPIO is one of the better known names in the DAP market, and they announced the FY800 late last month. Now it appears that this nano-lookalike is almost ready to be shipped, destined for the streets of Akihabara any day now. The Japan-bound MP3 player supports MP3, WMA, and WMA DRM 10 files, in addition to its ability to catch FM radio on the fly.

Comparisons to its iPod competitor are inevitable, and it seems that the 35 gram FY800 comes up a little short in the storage department with just 1GB (or maybe 2GB, if earlier reports are to be believed) on board. That said, it can make up for that with its SD expansion slot. My question, however, is if that red dot in the middle is a hot key for recording. That’d be pretty useful.

In any case, we haven’t heard anything about a North American launch just yet.