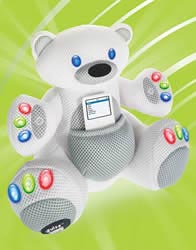 Apparently, it’s not only humans that are having an intense love affair with Apple; The animal kingdom is in on the action as well. Hasbro has had their i-Dog and i-Fish on the market for some time now, but they better make some room on the shelf for another iPod-toting creature: the iPulse Bear. It’s not a Hasbro product — from what I can gather — but the styling cues are awfully similar with the colorful button-like lights. Each paw is a speaker, apparently, and there’s a kangaroo-like pouch in the center for your favorite media player (yes, even non-iPods). The white version has very short fur, whereas the brown one is extra fluffy for some extra snuggle value. It can run off the optional AC adapter ($10) or a quad of C batteries. Price is $40 at Sharper Image.