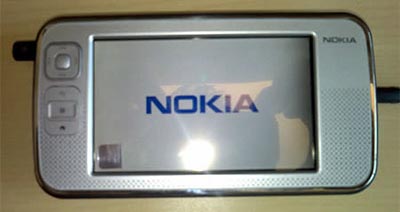 More handheld tablet news from Nokia. We’ve been rocking the Star Trek-themed 770 ever since we saw that vid on YouTube, and then we liked the multimedia-ness of the smaller 330. The monster successor is on its way: it appears that the Nokia 870 is getting closer to being a full-on computer, complete with “a webcam and more VoIP functions.”

Not very many details are available, because Nokia refuses to officially announce this juicy handheld. That said, the Finnish phonemaker has asked that the image be removed from the Internet Tablet Talk forums. Take that however you’d like.