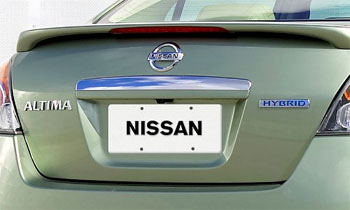 Not wanting to cannibalize their combustion engines market share, Nissan has finally choked up enough tar to debut their first gasoline-electric hybrid. The Nissan Altima Hybrid, with 198 horespower and a less-then earth-cleansing 36 mpg city and 39 mpg highway will be sold early in 2007.

They have licensed the powertrain from Toyota, dropped in their own QR25 2.5-litre 4-cylinder engine, coupled that with a 30kW (40hp) electric motor, and an electronic Continuously Variable Transmission (eCVT). It will be sold in California, New York, Massachusetts, Connecticut, Vermont, Rhode Island, Maine and New Jersey, with no plans to take it national. Hopefully strong sales will entice Nissan to go a bit beyond the 8 above mentioned states.