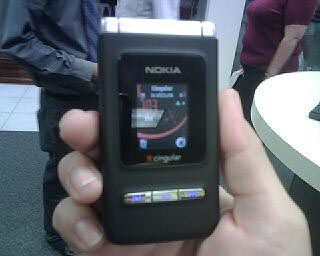 Talk to anyone at Nokia, and they’ll be quick to remind you that their N-series is composed not of “cell phones” but rather portable multimedia computers. Seems like we may be able to get our hands on some multimedia / high-speed data goodness soon because a Cingular-branded Nokia N75 has been spotted amongst us.

Now that we see that orange goop of a mascot on the front fascia, we’ve got to expect some discounts with a contract, making the N75 much more within reach for the average consumer. We were fully expecting a US launch in Q4, and now it seems to be coming to fruition. Of course, none of this has been confirmed yet, so sit tight.