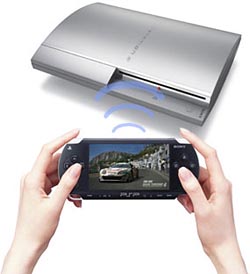 In the world of Nintendo, we see a link cable that allows the Game Boy Advance to function as an extra controller on the GameCube, unlocking several gameplay elements that would not otherwise be available. We anticipate something similar to happen between the DS Lite and Wii. Sony isn’t going to be left behind in this regard, providing a wireless connection between the PSP handheld and the upcoming PS3 next-gen console.

One of the more interesting plans calls for the PlayStation3 to download PSOne games and then to beam them over to the PSP via WiFi for some portable retro gaming action. There’s a distinct possibility that video can be streamed from the PS3 to the PSP as well, but LocationFree TV doesn’t appear to be in the cards. The PSP-as-a-PS3-controller idea, however, is very much a possibility.