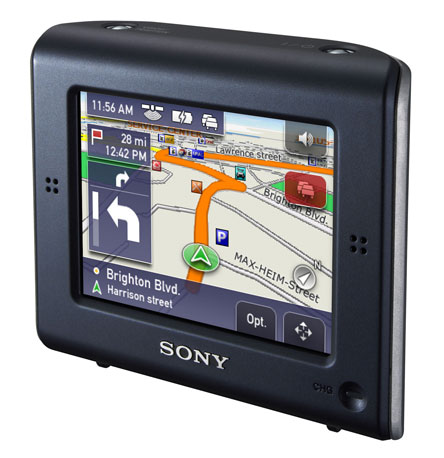 We saw the Nav-U NV-U50 and the NV-U70 come out early last December. Now Sony is dropping the NV-U71T and giving buyers a bit of a head-start on Christmas to make their unguided navigational decisions.

The NV-U71T includes an RDS-TMC real-time traffic receiver, this option was built in to the cradle and notifies you of heavy traffic areas, while giving you alternate route options. You get a taste for 90 days, but then to keep driving traffic-free it will cost you $4.95 a month.

Sony also implemented a bit of Wii action with their Gesture Commands, these are mapped to frequently used options like “take me home” by drawing the letter “V” on the 3.5-inch touch-screen. They mention that the display is decked out with an anti-glare coating, and why not, you do have windows in that car of yours.

Sony’s NV-U71T will sell for $500 this winter with a 2GB flash memory card pre-loaded with maps of the U.S., Canada, and 7.0 million points of interest.