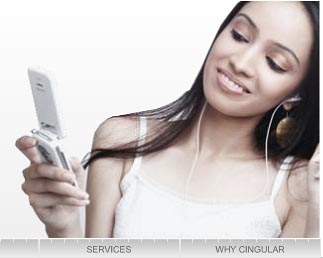 T-Mobile isn’t the only cell phone provider undergoing a makeover. Cingular hasn’t gone so far as to completely revamp their ad campaign, but their official website has undergone an overhaul. What is more noteworthy is the fashionable looking cell phone that has been revealed as a result.

Normally, changing up a website’s look isn’t all that big a deal, but when you get a pretty girl to hold up an unknown new gadget, the interweb gets abuzz. There’s no official word as to what this new cell phone is, but some people have identified it as the Siemens SF65.