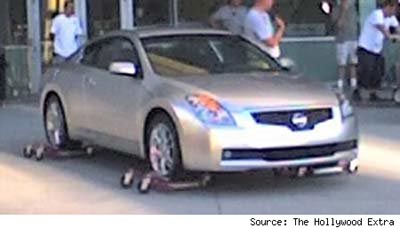 I’ll take this one with a grain of salt, but we’ve come across some rather grainy pictures of what is supposed to be a Nissan Altima Coupe. The photo looks a little too much like an Infiniti G35 Coupe, only with a Nissan badge on the front. In this way, I have a strange suspicion that it is really a Nissan Skyline from Japan.

That said, one can hope. As an upscale “cruising” coupe, rather than one geared toward pure performance, an Altima Coupe could compete quite nicely against the Toyota Solara and the Accord Coupe, both of which are based on sedan counterparts.

Update: Seems like this is part of some elaborate photo shoot in Los Angeles. A couple more pictures are available at LeftLane News.