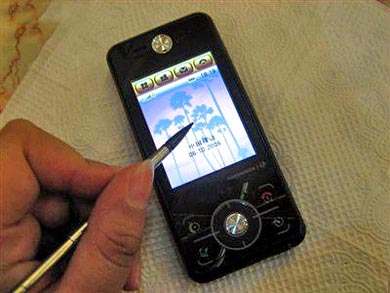 The next-generation musical offering from Motorola is the E690 — known as the ROKR E6 in some circles — and this Linux-powered smartphone with a touchscreen interface has just received the all important stamp of approval from the FCC. We reported on this nifty (and presumably skinny) phone early last month, and it doesn’t seem like all that much has changed in the meantime.

It still boasts a glorious 262k color QVGA display, 2.0 megapixel camera, a pair of “3D Surround” speakers, Bluetooth, mini-USB, handwriting recognition, and — of course — an integrated music/video player. We suspect it’s a tri-band GSMer (900/1800/1900), so may have to wait on an 850 MHz version before it gets a real North American release.