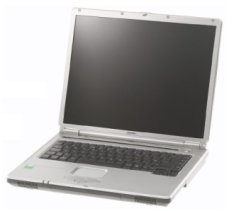 Here’s a brilliant solution to the laptop theft problem: don’t put a hard drive in there.

The Neoware m100 has no internal memory to speak of, so its only software is the bare-bones suite needed to run the machine (either Windows XPe or Linux). You’ll need to supply the storage capacity yourself, through portable means.

The laptop has a 15-inch display, stereo speakers, and connectivity via USB, Wi-Fi, and LAN. (Remember, this is slimmed-down, bare-bones stuff here, so these features, which are standard on US$300 laptops are included here as add-ons.)

Other than a longer-than-normal battery life, there’s not much else to say about the Neoware m100, other than it makes the perfect candidate for health care organizations, government departments, and anyone else who is susceptible to the catastrophic consequences of data theft.

Oh, yes, the price: Despite its relative lack of high-tech features, the Neoware m100 still carries a small-time notebook’s price tag, weighing in at US$759 for the Linux version and forty bucks more for the Windows XPe (XP Embedded) version.