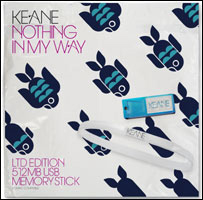 Now this is a keen idea.

The British rock band Keane will release their latest single on a Flash drive. Fans of plug-and-play music will no doubt find this fascinating, and easy to swap. (Read: no copyright protection.) That’s a marketing point, really, since the band (and its record label) obviously want to promote themselves and their latest musical efforts. It’s not like the entire album will be on that memory stick for the taking. (Side note: The Rolling Stones, Robbie Williams, and Barenaked Ladies have done that already, to a resounding near-silence in the market. The price tag, nearly double that of a corresponding CD, could have been the culprit.)

But this Keane single, which is “Nothing in My Way” by the way, will arrive on a 512MB USB drive, accompanied by nothing else but a video of the song. That means that you can use that memory stick for, well, memory.