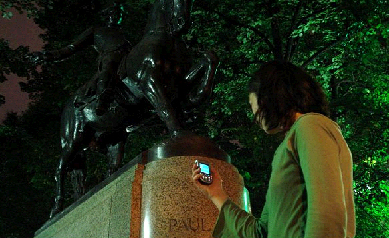 We cover all kinds of mobile technology on this site. Sometimes, the people are mobile in addition to their devices.

Such is the case with Ghosts of Liberty, a Halloween-themed game being played out on the night streets of Boston’s historic North End. Described as an “augmented reality game,” Ghosts of Liberty features a combination of mobile message and live-action clues, encouraging players to race across the clock to complete frightening tasks. Part riddle-solving, part scavenger hunt, part wireless experience… Ghosts of Liberty challenges players to embrace the melding of street theater and mobile technology.

The fun has already begun and runs until November 1. The game begins anywhere from 6 to 7 p.m. each night. A team of up to 4 people can compete, for a small fee of US$59.95 per team. The game lasts about two hours, for the slowest teams.