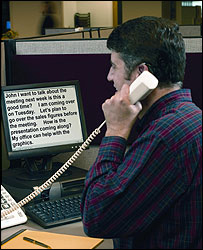 From the U.K. comes word of two separate programs aiming to turn written words into text to enable deaf people who prefer to speak when taking part in verbal conversations.

The Royal National Institute for Deaf people is unveiling the ScreenPhone, which utilizes the RNID’s Typetalk service. The deaf person can talk into the phone, in response to utterances by the calling party that are then typed by a third party and transmitted to a viewer attached to the phone.

Teletec, a telecom company, is releasing WebCapTel, which does virtually the same thing as the ScreenPhone, except on a larger monitor. WebCapTel uses an Internet connection and voice recognition software (and, consequently, has a higher price tag).

Still, plenty of people would pay a hefty price to be able to have a voice conversation.