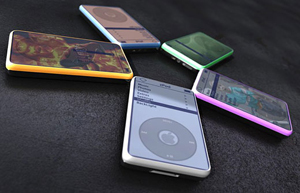 So, lately it’s been Zune this and release date that, with Microsoft talking up the touchscreen nature of their new device. Well, seems Apple has that, too.

According to sources that seem to be in the know, Apple will release a touchscreen iPod in December. That’s not all. The sources also say that the resolution on those touchscreen iPods will be 480p. That number should make the Zune makers tremble.

No word yet on wireless functionality, but that is sure to come down the pike a little later. But we can tell you this: If consumers can get their hands on a touchscreen iPod with that kind of super-fine resolution by Christmas, Zune will be yesterday’s news, even with a month’s head start. (And we have the figures and the names of so-called “iPod killers” to prove it.)