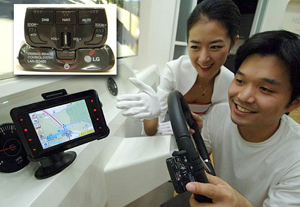 This is the sort of all-in-one device that wouldn’t go over well in the U.S., because the manufacturer would want to sell it in four pieces to maximize profits. In Japan, however, where they care a little more about auto safety and driver convenience, it fits right in.

I’m talking about the LAN-SD460, a new idea from LG that combines a GPS navigation system with a portable media player, while also adding steering wheel-mounted controls. No more taking your eyes off the road, no more bending over the wheel to reach the dash. That nav system has controls built into the steering wheel, so you can more easily control what you’re seeing onscreen. Of course, that nav screen still has to be looked at, and that takes some of your attention away from the road in front of you, but we’re talking percentages here.

The screen is a rather large 4.1 inches, and the LAN-SD460 also has DMB capabilities, although the manufacturer doesn’t recommend watching TV while you’re the driver.