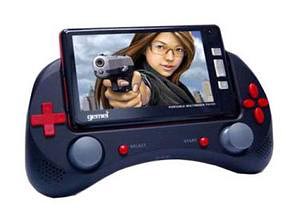 The Gemei X-900 may look a little like a Genesis controller and for good reason: this PMP has built-in emulators to let you rock some cool old school games. It’ll supposedly play Nintendo Entertainment System (NES) and Sega Genesis (a.k.a. Mega Drive) games right out of the box. This is above and beyond its usual duties as a PMP, busting out FLAC (Free Lossless Audio Codec) tunes, videos, images, and FM radio. There’s even an-board camera to boot on this 1GB player (which should be plenty of room for retro Mario and Sonic). Interestingly, it looks like the display portion can just pop right out when you’re not playing games, giving it a more conventional PMP look.