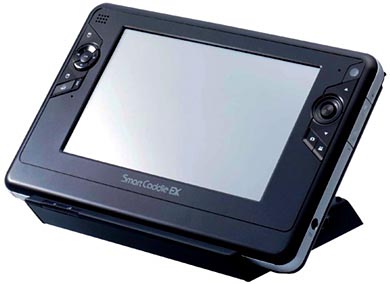 UMPCs haven’t caught on quite as well as the original developers had hoped, but electronics makers are intent on pushing the format into the mainstream. A company known as PBJ — no, they don’t make sandwiches like how ma used to — announced the SmartCaddie UMPC way back in March, and now they’re giving the machine a makeover. The newly christened SmartCaddie EX comes powered by a 900MHz Intel Celeron M processor, instead of the 1.0GHz Via C7-M ULV we saw in the Japanese model. That’s not the only downgrade: the 40GB hard drive has transformed into a 30 gigger, but you still get 512MB RAM and a pretty abysmal 2.5 hours of battery life. The one thing that has gone up is the price, which is now US$1,167.