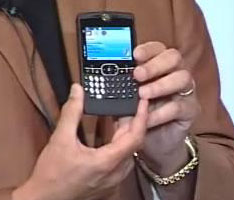 Apparently that first outing was simply an amateur-ish effort, because the world’s second largest cell phone maker is set to release a beefed up smartphone called the Moto Q Pro. From what we can gather, it’ll still be running on the same old Windows Mobile 5 with the standard set of save me from the bad guys features like firewall protection, data encryption, and virtual private network authentication.

Motorola is staying pretty hush about the Q Pro, but we have reason to believe it will rock the HSDPA. There’s still no word on whether they’ve buckled down and included WiFi, though. The plan appears to call for a Q1 2007 launch, but we’ll have to wait for some sort of official announcement first.