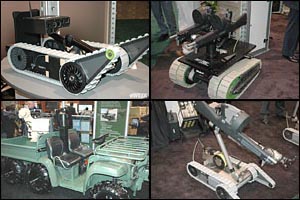 Isaac Asimov definitely would not approve.

A recent iRobot gathering in Washington, D.C. featured robots designed for war. The autonomous killing machines were out in full force: One robot packed double-barreled shotguns. Another had a 30-caliber machine gun.

Not all robots were packing heat, however. Some are the kind that we’ve heard about before: the ones that will defuse bombs, carry wounded soldiers back, and fill other sorts of mundane needs on the battlefield.

The ones with guns got all the attention, however.

“A robot may not harm a human being” indeed.