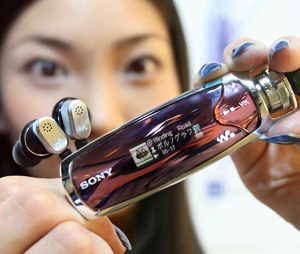 Sony is looking to steal a little of Apple’s thunder by designing a video-capable Walkman. The bigwigs at Sony aren’t talking all that much; they’re just throwing up trial balloons.

Sony, even with its new line of sleek-looking Walkman music players, has just 10 percent of the DAP market. In the face of Microsoft’s Zune launch and Apple’s continued stranglehold on the popular perception of what a portable audio and video player should be, Sony has quite the uphill battle.

Still, far be it for Sony to back down from a challenge. The venerable electronics giant announced a series of Walkman updates, shaped like a bottle of perfume. The 4GB model, which has a noise-reduction function, will sell for US$240.

Still, it’s the very idea of a Video Walkman that has many Sony adherents anticipating big things. We have to wonder, though, whether this video model will be in the same shape as those super-slim ones just unveiled. If so, that screen will be really small.