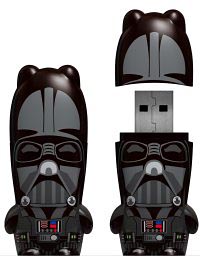 I sense something; a presence I’ve not felt since…

Some of us may still be reeling from Hayden Christensen’s performance as a young Anakin Skywalker, but for purists, nothing beats the old school Vader voiced by James Earl Jones. Officially sanctioned by the almighty George Lucas is a special collector’s edition USB thumb drive featuring the likeness of the dark Sith lord. The Darth Vader flash drive will be limited to just 3500 units, and despite its somewhat cartoony proportions, will surely sell out.

Wanna pop the top off of Darth Vader? Then you’ll need to plop down $80 for 1GB, or as much as $170 for a four-gigger. Word is that there are more Star Wars themed items coming down our way: George has got to make his paycheck somehow right?

Update: See those strange bump-ears on top of Darth Vader’s head? Well, it turns out these flash drives are simply repainted versions of these cutesy-wootsy things. Not so geek chic anymore, huh?