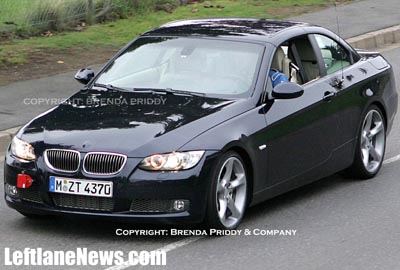 We’re getting closer to a production-ready version of the 2008 BMW 3-series convertible. In fact, one of the hot drop-tops was seen cruising the test track, barely veiled in any disguise whatsover. The E93, as Bimmer fans call it, will be mechanically identical to its coupe cousin, but where you’ll get the most enjoyment is in the retractable steel roof that folds up and fits in the trunk.

Naturally, the E93 fits into the same market as the Mercedes SLK, so you should expect pricing to be in the same range. Plans have the new open air 3-series arriving in European showrooms in March 2007, with North American offerings coming shortly thereafter. As a side note, there are rumors floating around that there will be a softtop version in the near future as well.

Couple more pics in the “Read” link below.